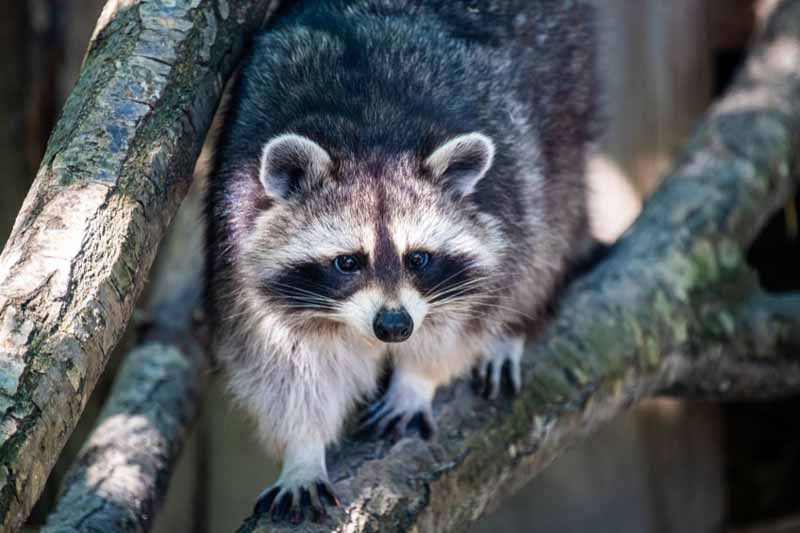 Raccoons fight in trees to establish dominance and territory. Fighting also allows them to practice their skills for mating and survival.

In the wild, raccoons often live in close proximity to each other and must constantly compete for food, shelter, and mates.

This competition can lead to aggressive behavior, such as fighting, which is why you may see them brawling in trees from time to time.

While raccoon fighting may look fierce, it is usually not deadly. The animals will typically stand on their hind legs and swat at each other with their front paws.

They may also bite each other’s faces or necks. This type of fighting usually only lasts for a few minutes before one of the raccoons backs down and retreats.

Raccoons are interesting creatures. They are known for being intelligent and adaptable, as well as for their masked faces and bushy tails.

Raccoons are also known for their propensity to fight. What is not generally understood is why raccoons fight.

What do raccoons fighting in trees mean?

Raccoons fighting in trees usually means there is a food source nearby that is attracting them.

Sometimes it can also indicate that there is a female in heat, which will attract males from far and wide.

Either way, it’s best to keep your distance and let them sort it out themselves.

There’s no need to call animal control unless the fighting is getting too close to your home or property.

Usually, the best thing to do is just wait it out and let them move on.

Why do raccoons fight each other?

The most common reason for raccoons to fight is over territory. They will also fight over food and mates. Raccoons are very territorial animals and will protect their territory fiercely.

If two raccoons meet on another’s territory, they will usually have a violent confrontation.

Raccoons are also known to be very aggressive when it comes to mating. The males will fight each other for the chance to mate with a female.

The victor of these fights will then mate with the female and father her offspring. In some cases, raccoons will also fight simply because they are angry or irritated.

Raccoons are very strong and powerful animals, so when they fight, it can be quite a brutal affair.

These fights can sometimes even result in death.

How to tell if raccoons are fighting in your backyard

If you’ve ever heard strange noises in your backyard in the middle of the night, there’s a good chance you were listening to raccoons fighting.

Raccoons are one of the most common wild animals in North America, and they’re known for their characteristic “mask” markings on their faces.

They’re also notorious for being aggressive and territorial when it comes to defending their territory from other raccoons.

If you think you might have raccoons fighting in your backyard, there are a few things you can look for to be sure.

One of the most obvious signs that raccoons are fighting is the noise they’ll make. Raccoons are very vocal animals, and when they’re fighting, they’ll let out loud screeches, growls, and snarls.

Another sign that raccoons are fighting is if you see them chasing each other around. Raccoons will often chase each other up trees or across yards in an attempt to assert dominance over their opponent.

Finally, if you see two raccoons with their tails raised in the air and facing each other, this is a sure sign that they’re about to fight.

If you see any of these signs, it’s best to stay away from the area and let the raccoons fight it out. Getting too close to a fight between two raccoons can be dangerous, as they are known to attack humans if they feel threatened.

If you have pets or small children in your backyard, it’s also important to keep them away from areas where you know raccoons are fighting.

Raccoons are typically nocturnal animals, so if you hear noises coming from your backyard at night, there’s a good chance it’s raccoons fighting.

If you’re unsure, you can always wait until daylight to check the area for signs of a fight.

Do raccoons fight to the death?

Yes, raccoons fight to the death if two males fight over a female. However, they will also fight if two females are competing for food. Raccoons have also been known to kill each other over territory disputes.

It’s not uncommon for a raccoon to die from its injuries after a fight. Raccoons are also known to carry diseases, which can be passed on to other animals (and humans) if they are bitten or scratched during a fight.

So, while it’s not exactly common for raccoons to fight to the death, it does happen on occasion. If you see two raccoons fighting, it’s best to stay away and let them sort it out themselves.

They can get pretty vicious when they’re fighting, and you don’t want to get caught in the middle.

Raccoons fighting or mating – How to know which?

It can be hard to tell the difference between raccoons fighting and mating, but there are some clues that can help you determine which is happening.

The easiest way to tell the difference is by watching their behavior. Raccoons fighting will usually be very aggressive, biting and scratching each other while mating will be more gentle.

If you’re still not sure what’s going on, there are a few other things you can look for. Mating raccoons will often have their tails intertwined and their heads close together.

Fighting raccoons will have their tails straight out and their heads far apart.

Finally, if it’s late at night and you see two sets of eyes glowing in the dark, it’s probably safe to assume that you’re seeing a fight rather than a mating pair.

So, if you’re not sure whether you’re seeing a fight or a mating pair, the easiest way to tell is by their behavior. If they’re being gentle with each other, it’s probably mating. If they’re being aggressive, it’s more likely that they’re fighting.

Other clues that can help you determine which is happening are the sound they make and their body language.

If you still can’t tell, try looking for other signs like if it’s late at night or if their tails are intertwined.

The sounds of raccoons fighting are often accompanied by growling, hissing, and snarling. Raccoons will sometimes fight to the death. Though their fights may look fierce, most raccoon fights are actually just displays of dominance and rarely result in serious injury.

If you hear the sounds of raccoons fighting, it’s best to stay away. Though they may look cute, raccoons can be dangerous animals.

If you get too close, they may attack. If you see a raccoon that looks injured or sick, call your local animal control or wildlife rehabilitation center for help.

Never approach a wild raccoon, no matter how friendly it may seem. It might have rabies, which is a fatal disease. Rabies is most often spread through the bite of an infected animal, but it can also be spread through saliva.

If you are bitten by a raccoon, wash the wound immediately with soap and water and see your doctor for treatment.

Male raccoons are more aggressive than female raccoons because they are more territorial and thus more likely to attack intruders or perceived threats. Females, on the other hand, are typically only aggressive when protecting their young.

In general, though, it is best to avoid contact with any raccoon, as they can be unpredictable and dangerous.

If you must interact with one, always use caution and consult a professional if possible.

Males are also very aggressive when looking for a partner and will often fight other males for the chance to mate with a female. This can sometimes lead to serious injury or even death.

So, while both sexes can be aggressive, male raccoons are generally more aggressive than females.

How do raccoons defend themselves?

Raccoons have very effective defenses. They are fast and agile, and they can climb well. They also have sharp claws and teeth that they use to defend themselves.

Raccoons sometimes hiss or growl when they feel threatened, and they may also attack if they feel it is necessary.

Sometimes, raccoons will use their tail as a weapon, and they will also try to bite if they feel threatened. Overall, raccoons are very good at defending themselves, and they usually only attack when they feel it is absolutely necessary.

Often, the best defense for a raccoon is to simply run away and hide. They are very good at doing this, and it usually works well for them. If all else fails, though, a raccoon will fight back and defend itself as best it can.